Carlsbad High wrestling coach Joe Bach’s sophomore campaign proved no matter the unusual circumstances he will find a way to keep Caveman and Cavegirl wrestling dominant in the state of New Mexico.

In the COVID-19 pandemic shortened season Bach brought nine wrestlers to the 2021 New Mexico state wrestling tournament and left with six of them placing in the Top-6, also earning Carlsbad a 6th place finish as a team with 99 points.

Caveman junior Jacob Fuentes make good on his promise that he would claim a state title this year. Fuentes went 3-0 in the tournament with decision wins over all three opponents to finish the season a perfect 14-0. 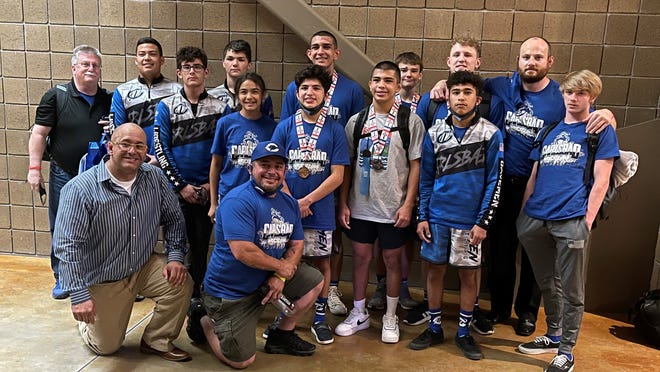 Rogers finishes his senior campaign at Carlsbad with a 14-2 record and a 47-12 overall record in his two seasons wrestling at the varsity level. Rogers will wrestle collegiately next year for the University of Jamestown.

More:Carlsbad’s TJ Rogers signs with University of Jamestown for wrestling

Carlsbad sophomore Marcus Najera accomplished his goal of finishing better than he did last season (5th) with a third-place finish. Najera ended the season with a 9-0 major decision victory to bring his record to 14-2.

Sophomore Jonathan Waters, who had no previous varsity experience before this season and was a wild-card tournament addition, took home sixth place. He won his first two matches via pinfall and finishes the season 8-8.

Junior Logan Romero finished in sixth place but sadly has to forfeit his final match of the tournament due to an injury he suffered in the previous match. Romero finishes 15-4 after repeating his sixth place finish for the second straight year.