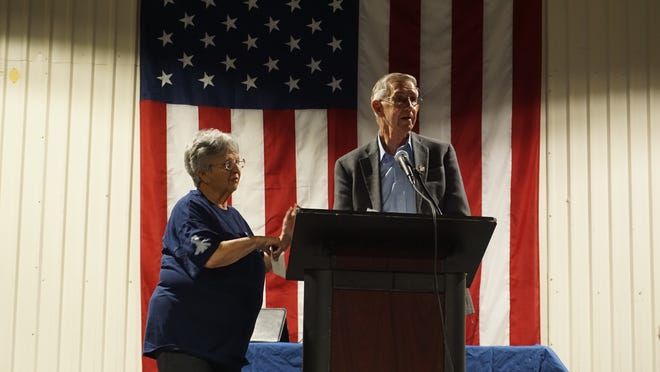 The event was organized by Epsilon Sigma Alpha and Jay’s Automotive and featured live and silent auctions, live entertainment and dinner.

Carol Worley from Packs for Hunger said all proceeds will go directly to the organization, which spends roughly $4,000 to $5,000 a week providing food to children in need.

Volunteers for the organization fill backpacks with non-perishable food, that are distributed at Loving and Carlsbad schools.

“In some instances, those backpacks that kids take home is all the food they have that weekend have to eat that weekend,” Janway said during the event. “The stories that they hear on a regular basis are truly heartbreaking.”

Worley said the organization made more than 19,000 packs throughout the past 15 months of the pandemic. While the organization normally fills backpacks, she said they now use plastic bags as a precaution due to COVID-19.

Worley said she hoped the organization can return to using backpacks.

Entertainment was provided by Mariachi’s Unidos and DJ Kool Arrow.

Claudia Silva is a reporter from the UNM  Local Reporting Fellowship. She can be reached at [email protected], by phone at (575) 628-5506 or on Twitter @thewatchpup.