After a short absence the On-Target Firefighter Combat Challenge returns to Carlsbad later this year.

Tuesday night, Carlsbad City Councilors approved a request from the Carlsbad Fire Department to host the challenge in downtown Carlsbad in early October.

Carlsbad Fire Chief Richard Lopez said the last challenge in Carlsbad was in 2018 at the Lake Carlsbad Beach.

More:Carlsbad firefighters place 3rd in the world at combat challenge

He said plans did not materialize between the City and the organization responsible for the challenge in 2019 and last year COVID-19 cancelled all activities in and around Carlsbad.

Lopez said moving the challenge from the Beach to downtown allows for greater community involvement.

“We want to make it bigger and invite vendors, local companies, to bring out stuff to sell,” he said.

In a memo to Councilors, Lopez said set up would start on Sept. 30 and the actual event starts on the afternoon of Oct. 1 and continues Oct. 2.

“We are very excited to have the firefighter combat challenge in downtown Carlsbad. This is something we’ve tried to make happen for a few years but scheduling and then COVID (19) prohibited it from happening,” said MainStreet Board of Directors President Jason Shirley.

Key said the event has potential to bring more customers for downtown merchants and restaurants.

“We will also see our community and visitors finally having an opportunity to come together,” she said.

In the memo to councilors, Lopez said the challenge seeks to encourage firefighter fitness and demonstrate the profession’s rigors to the public.

He added competitors’ race against themselves their opponents and the clock.

“We’ve got the best team in the world and we want to put them on the biggest stage Carlsbad has,” said Shirley, who also represents Ward 3 on the Carlsbad City Council.

Lopez said Carlsbad firefighters set three world records in 2016 and 2017 as they worked for years refining their firefighting skills.

He said some members from those teams either retired or became parents. Carlsbad Fire Department will be represented this year.

“I don’t know what kind of team we’ll have this year,” Lopez said.

He said this year’s challenge was open to any fire department in Southeast New Mexico. He said teams from Texas, Hobbs and the Waste Isolation Pilot Plant competed in past events along with Carlsbad.

“Carlsbad MainStreet is excited to work closely with our Fire Department to support and showcase our world record holding team and New Mexico individual record holders with a huge event,” Key said.

More:City of Carlsbad update: Thanks to emergency responders

Shirley said MainStreet was not ready to reveal its entire playbook for October.

“So, we are more than ready to let loose a little. We’ve got some things up our sleeve,” he said. 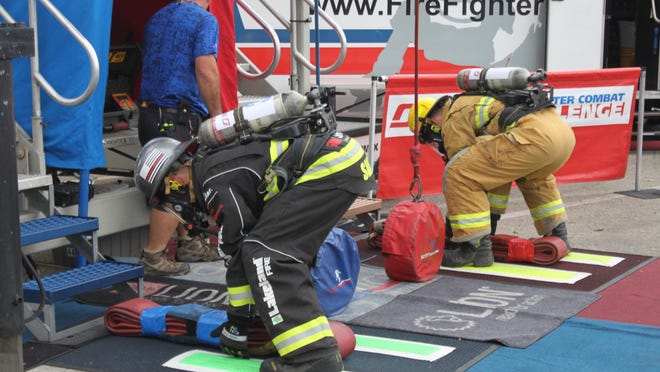