A fungus threatening bat populations across New Mexico and the U.S. was discovered by the federal Bureau of Land Management in caves near Roswell, mere miles from the bat population that call Carlsbad Caverns home.

The two caves were in De Baca and Lincoln counties and samples were inconclusive from a second cave in Lincoln County.

Most of the 500,000 bats that roost in the Caverns are Brazilian freetail bats which migrate and could spread the fungus known to cause white nose syndrome to colonies as far north as Montana and as far south as Mexico, officials said.

Carlsbad Caverns:Agencies mobilizing to save bats from white nose syndrome

White nose syndrome refers to a white fungus that develops on bat’s face as it hibernates, awaking the bat early before it has enough fat stored to survive.

It’s easily spread from bat to bat, and thus cave to cave. Spores can also be transferred by humans through clothing.

The BLM announced on Tuesday that the fungus Pseudogymnoascus destructans (Pd) was found in samples from hibernating bats and cave walls in two caves managed by the agency’s Roswell Field Office.

Children of the night: 6 facts about bats beyond Halloween horrors

Carlsbad Caverns Superintendent Doug Neighbor said the announcement of white nose’s spread to New Mexico was expected as it was found in nearby states.

He said the Caverns was monitoring for the syndrome for years, but recently interest grew based on recent discoveries.

Neighbor said the park recently issued three separate research permits for studies at the Caverns related to white nose syndrome, and the results were forthcoming.

“At Carlsbad, we’ve had bat researchers monitoring it for quite some time. With this report by the BLM, all of a sudden there was more heightened interest with the researchers to do work directly related to White Nose syndrome,” Neighbor said.

“If they’re roosting in a colony together, that fungus can be easily transmitted. But we don’t have enough research to document that. That’s why the researchers are researching it more in-depth.

“Now that it’s known to occur here in the area, we really want to look at the Brazilian free-tail colonies.”

White nose has already killed millions of bats in North America, read the BLM’s announcement, wiping out 90 percent of exposed populations in three species in less than 10 years, per a study from Conservation Biology.

It was found in New Mexico during routine white nose syndrome surveillance in April when a team of biologists observed the white, powdery substance indicative of the syndrome on swabs from the bats.

Testing was conducted by the University of New Mexico and Northern Arizona University, and the results were verified by the U.S Geological Survey (USGS).

Cave at your own risk:NM state law releases landowners from liability

White nose syndrome was previously confirmed in 36 states including Texas and Oklahoma before being found in New Mexico with evidence of the fungus but not the syndrome in three others.

“Any new sign of its spread is worrisome because bats are vital for healthy ecosystems,” read the BLM report. “Although bats themselves are the primary way the fungus spreads, possible spread by human activity in caves is a major concern. Neither the fungus nor the disease affects humans or pets, but people can help to limit their spread.”

To stem the spread of white nose syndrome, visitors to caves were asked to stay out of closed caves or mines, decontaminate boots and any other caving gear before entering caves, and do not touch bats and report sick bats to rangers.

To avoid accidentally transporting bats, cave visitors were asked to check canopies, umbrellas or any other outdoor items they may have roosted in. 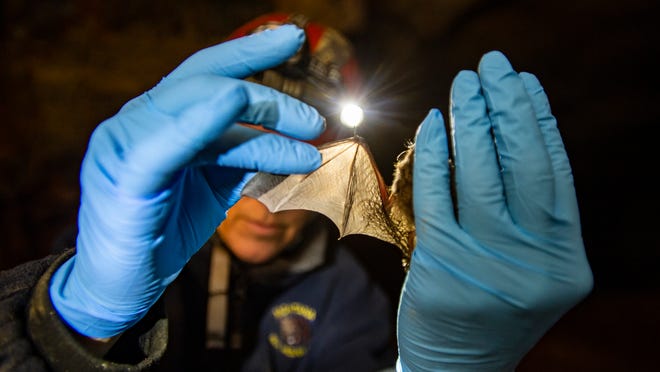 A national fight to save the bats

To mitigate white nose syndrome and the killing off of bats across the U.S. the U.S. Fish and Wildlife Service and the USGS partnered on the North American Bat Monitoring Program (NABat) in 2015 to study the spread of the fungus and disease.

“Through strong collaborative efforts like this analysis, we continue to learn more about the dynamics of this disease and we will build the infrastructure we need to conserve native bats for future generations.”

It was first documented in New York in 2006 and since spread to 35 states and seven Canadian provinces, confirmed in 12 bat species in North America.

Since then, the agencies performed multi-state analysis of numerous bat species, and protections were enacted by state agencies and in Canada.

‘It’s our place to take care of them’:New Mexico landowners fight to save lesser prairie chicken

There is no known cure for white nose syndrome, but scientists hope to find a way to control its spread.

“The severity of the impact of this disease on bat populations is staggering. We found that nine out of 10 bats of the most vulnerable species are now gone,” said Winifred Frick, chief scientist of Bat Conservation International and an author on the paper.

“Bats are essential to our ecosystems, and our results that stem from working with so many biologists across the United States and Canada focus our efforts on how best to protect these important mammals.”

A report from the journal Science found bats contribute at least $3 billion every year to the agricultural industry by eating insect pests.

In Carlsbad, that means less pesticides are needed for cash crops like pecans, Neighbor said.

He also pointed to diseases like malaria or Zika virus that could be prevented from reaching people when bats eat carrying bugs.

“For us, we know that a lot of insects, a lot of moths can cause damages to crops around here. If the bat takes care of it and eats the insects that cause crop damage, you’re not having to treat as much with insecticide,” Neighbor said.

“Most people think all bats eat mosquitos. They will, but there’s many blood-borne pathogens that come from mosquitos. Protecting the bat populations is really important for both human health and agriculture.”