The eyes of some of the biggest oil and gas companies in the world were on Damian Capello at the 2020 Carlsbad Mayor’s Energy Summit.

With his team and a slew of camera and audio equipment set up on two stages at the Pecos River Village Conference Center, Capello’s video production company Red Rocket Video was tasked with streaming the annual gathering of oil and gas leaders for the Carlsbad community and throughout the U.S.

With the Permian Basin emerging in recent years as a leader in fossil fuel production, all eyes turned to cities like Carlsbad in southeast New Mexico, and through Capello’s camera lens the community’s message was shared before the nation.

It was a big responsibility, and the most intricate set up Capello said the local media company had created in the unique niche Red Rocket found during the COVID-19 pandemic.

As more and more public meetings, shows and other events went virtual during the health crisis, when public gatherings were discouraged, Capello and Red Rocket Video saw an opportunity.

The company was able to offer services to film and stream public meetings for organizations like the City of Carlsbad and the Department of Energy which runs the Waste Isolation Pilot Plant nuclear waste repository.

Capello, 32, said the pandemic did bring challenges initially as many businesses closed their doors, slashed media budgets and cancelled contracts they had with Red Rocket.

As vaccines for the virus became accessible and business restrictions were lifted by the State this year, he said 2021 was Red Rocket’s most successful year yet.

“Things just started going gangbusters this year. I was at the right place at the right time,” Capello said. “People just can’t get enough video. There’s more work in southeast New Mexico than my company can handle.” 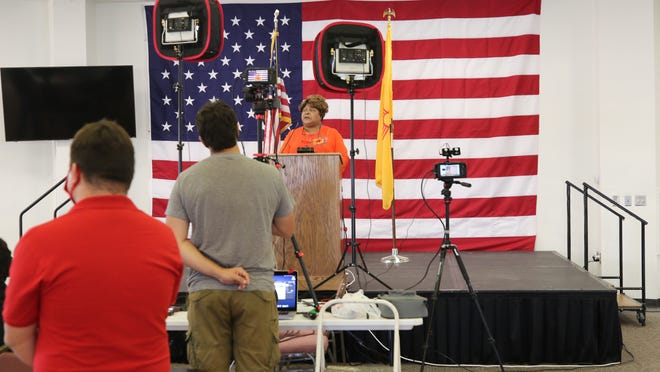 It all started at Carlsbad High School when Capello, who described himself as a good student coming from a blue-collar family, found an unlikely interest and art form that would define his career.

His father was a pipeliner and growing up Capello said studying the arts was never a strong option for a family prioritizing practicality and the employment-potential of academic study.

But the art of video production was something Capello could not set aside.

After that first video class in high school, he was soon filming football games and in college began shooting concerts and even teaching his own classes, earning a certificate in communications from New Mexico State University.

There was little work in video production locally after Capello finished school and returned to college, and he soon found himself at a desk job at a telecommunications company.

He found himself unhappy at the job, yearning to build upon his passion for video and struggling to make ends meet.

He told God he would do anything to just support his family.

“My home life was getting really bad,” Capello said. “We were going broke. I told God do whatever you want with me, but make sure my family is taken care of.”

The next morning, Capello said he got the courage to call the Walter Gerrells Civic Center in Carlsbad and ask if they needed help.

That was the beginning of Red Rocket in 2010, with Capello hired to shoot live concerts at the local venue.

“I love live production,” he said. “That’s what they hired me for.”

In 2014, an accidental radiological release was reported at WIPP and the DOE began holding weekly townhall meetings to update the public on the clean up process.

Red Rocket was hired to stream those townhalls live, building Capello’s and his company’s reputation in the community.

As the years went on, he started a promotion company Red Rocket Media and continued to build the brand.

Today, Capello said Red Rocket has about 80 to 90 clients as far east as Atlanta, Georgia and as far west as Scottsdale, Arizona serving a diverse clientele.

On one assignment, Capello might find himself creating digital promotional materials for jewelry companies and at another filming tryout videos for prospective major league baseball players.

And his entrepreneurship didn’t stop there. Today he owns a handful of local businesses.

He also owns a bookkeeping company Alpha Booking and Consulting and a rental company for events Event Planning and Rental.

Capello is also a minority owner of Cavern City Media and formed a nonprofit One Life Saved to provide digital media services to local nonprofits or other groups in need at no cost.

“Let’s use video to communicate with the rest of the world.”