The Carlsbad City Council approved an agreement with a Texas fireworks firm for production of the 2022 Fourth of July show.

“The (Carlsbad) Fire Department has been managing the Fourth of July Fireworks show for decades,” said Fire Chief Richard Lopez in a memo to City Council. “We took great pride in providing the best show possible for the City.”

The last fireworks show produced by the Carlsbad Fire Department was 2019. Lopez said Carlsbad firefighters decided to go with a professional company after personnel from the Roswell Fire Department were injured nearly three years ago after fireworks exploded while preparing for a show in Roswell.

Roswell firefighter Jeff Stroble died in Lubbock on July 21, 2019 after injuries in the June 5, 2019 explosion.

Based in Era, Texas, Precision’s website indicated the company’s shows are ready for immediate use and Precision has $5 million in show insurance and hazmat transportation.

According to the agreement between the City and Precision, next year’s fireworks should last nearly 25 minutes and feature 1,585 shells.

In the proposal, Williams wrote Carlsbad residents would see all sorts colors in 2022 from gold to orange and there would be multiple effects like whistles, crackling dragon eggs, comets mines and spinners.

Williams required $30,000 from the City of Carlsbad after agreement approval. The rest is due around July 4, the agreement read.

“I thought the entire Fourth of July weekend was spot on,” said Chad Ingram, chief executive officer of the Carlsbad Chamber of Commerce.

“I think what the City did not only with all the events that happened Independence Day weekend with the fireworks show was just spectacular. It was a much-needed celebration.”

Ingram said he is looking forward to Independence Day in Carlsbad next year. 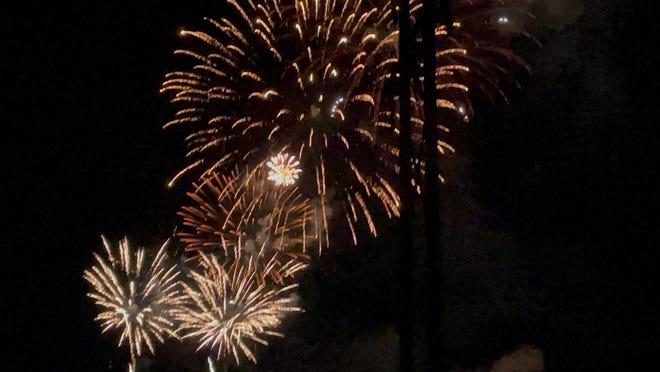