ALBUQUERQUE –  For 13 years Misty Long has been the Carlsbad Cavegirls head coach. All 13 years Carlsbad qualified for the postseason but never made it to the state championship game, until now.

In a battle which truly pitted the two best girls soccer teams in New Mexico, No. 1 Carlsbad outlasted No. 2 Albuquerque and was able to score in the final minute of the contest to take home the Blue Trophy for the first time in school history.

Coming into this game Albuquerque (7-1) and Carlsbad (11-0) outscored their opponents a combined 87-6. Rather than an offensive shootout, both defenses held strong throughout. Carlsbad’s Korrine Bradford and Albuquerque’s Ainsley Westlake did their jobs as goalkeepers for the first 79 minutes of regulation play. 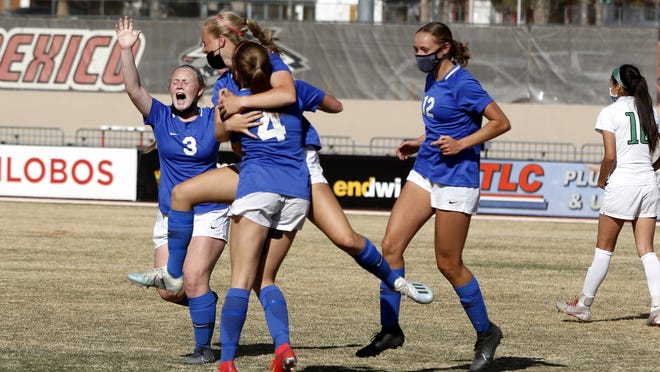 With less than a minute left in regulation the score was still tied at 0. Carlsbad defender Dominique Chacon cleared the ball to Allie Meyers who passed the ball to Alexa Dugan near the top of the goalie box.

Dugan had the ability to shoot then, but opted for a better scoring angle. She got some distance away from Albuquerque defenders Elena Dunn and Nina Mendez and from the top of the keeper’s box Dugan’s shot went into the top left portion of the goal where a diving Westlake couldn’t stop it.

The Cavegirls needed to hold on for the final 30 seconds before time ran out sending the Carlsbad players and fans into a frenzy.

“We knew this was a winnable game if we defend and do the little things right. (In the final minutes) we just let things flow. Sometimes you want to push things. Fortunately I have two assistants that talk me out of it sometimes because if you push you open yourself up for counters.

“It’s just amazing. This season with COVID and not having the numbers we normally have. This team is mindblowing that this happened this year. (Albuquerque) had its top players there. It’s crazy these kids continued every freaking day to meet the challenges they were given. That’s what it came down to. They met the challenges.”