The Carlsbad baseball and softball teams began their district schedules with dominant wins in the duo of doubleheaders on Tuesday against Clovis. The Cavemen and Cavegirls shut out the Wildcats in all four games, run-ruling Clovis a combined 22-0 in baseball and 24-0 in softball.

The Cavemen (8-2) were supposed to travel to Clovis (4-6) but due to inclement weather Clovis’ baseball field wasn’t in condition to be played upon. Carlsbad head coach Alan Edmonson found out on Memorial Day about the change in venue to Carlsbad. No changes needed to 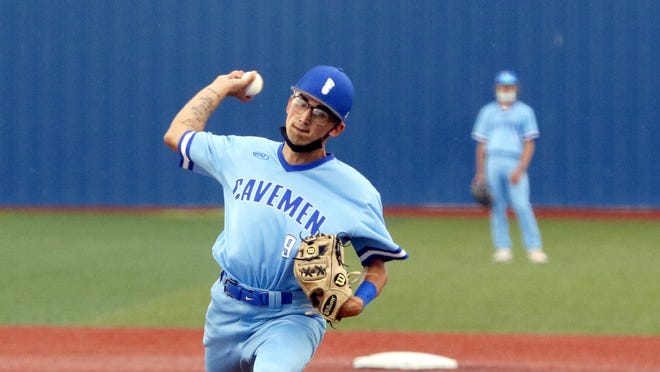 Carlsbad wasn’t able to completely avoid the weather. In the second inning of the first game lightning was reported about six miles from Carlsbad’s campus, forcing a mandatory 30-minute wait period to let the storm pass.

It ended up being closer to 45 minutes before the teams were allowed to go back to the fields but the near hour-long break didn’t bother the Cavemen at all.

Carlsbad was leading 2-0 before the lightning delay and proceeded to score seven additional runs in the bottom of the second inning to take a commanding 9-0 lead and gave starting pitcher Jacob Echavarria the confidence to throw Carlsbad’s second no-hitter in its last three games.

Echavarria struck out six batters, walked one and had two batters reach base on errors but he didn’t surrender a single hit. Echavarria pitched an effective game, needing just 65 total pitches for his five-inning no-no. In the fourth inning he needed just six pitches to retire the side.

The first inning was the lone rough patch for Echavarria. He walked Clovis’ first two batters and this game looked anything like the no-hitter it would end up being. Clovis’ third batter hit a grounder up the middle into a fielder’s choice doubleplay to let Echavarria tightrope walk out of the inning unscathed.

“Maddux (Edmonson) and Nolan (Perry) turned that doubleplay which was big,” Edmonson said. “You get a huge sigh of relief for the pitcher when you go from (runners at) first and second with no outs to two outs and a runner on third. A doubleplay a pitcher’s best friend and Maddux and Nolan showed us why.”

After taking Game 1, 10-0, the second game was more of the same for the Cavemen. Nolan Perry and Ashton Whiteaker each pitched three innings for Carlsbad and didn’t allow a single hit for Carlsbad’s third no-hitter in four games and fourth this season.

Edmonson said he planned to give Perry about 40 pitches to work with and was treating his start like a relief appearance while the Cavemen prepare for a deep postseason run.

“Nolan’s going to have to throw again on Saturday and probably again on Tuesday,” Edmonson said. “We don’t want to overwork them or abuse their arms. Some of these kids have a career past high school baseball.”

Perry struck out eight batters and Whiteaker recorded four. The duo were equally efficient, needing just 66 combined pitches to get Carlsbad the win.

The Cavegirls (8-1) struggled to start out its doubleheader against Clovis’ pitching, but once Carlsbad got the slower timing of Jordan Angeles and Bryanna Gallagher down, the bats came alive. Carlsbad needed just five innings in both games to top Clovis (3-7), 10-0 in Game 1 and 14-0 in Game 2.

Faith Aragon took the circle in the first game and proceeded to throw a three-hitter while striking out nine Wildcats and walking one. In the batter’s box Aragon went 4-for-6 with three RBIs and four runs scored in both games, hitting for the cycle with her home run and double coming in Game 2.

Cavegirls head coach John Tigert gave the ball to Haven Schoolcraft for Game 2 and the results were nearly identical. The sophomore struck out nine batters, allowing two hits and not giving up a single walk. Schoolcraft was 2-for-4 hitting with a double, two RBIs and two runs scored.

As a team all nine Cavegirls recorded a hit in Game 2 and in both games combined for 25 hits.

The Cavegirls travel to Roswell to face the Lady Coyotes on Thursday for a doubleheader at 5 p.m.

The Cavemen stay at home to host Roswell this Saturday for its own doubleheader at 1 p.m.