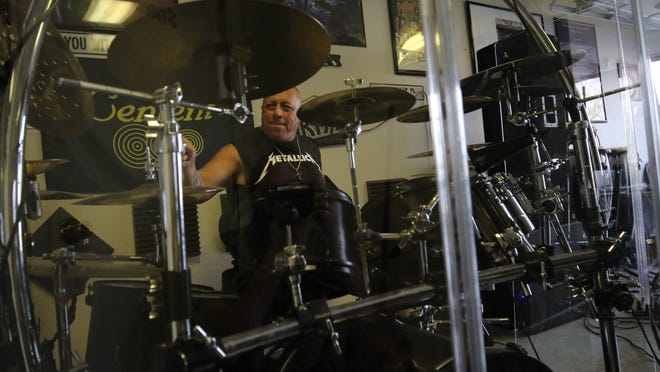 Guitarist Mike Ybarra thinks about his niece Brianna who died at 21 from cancer when Ybarra’s band Stranded plays their latest song “Angel’s Bridge.”

Drummer Raul Ortega thinks of a friend who died from suicide and singer Jason Vigil thinks about his late mother.

Ortega’s bass drum throbs in the opening of the song, meant to represent a heartbeat ahead of the lyrics on loss and reconnecting with loved ones in the afterlife.

“Angel’s Bridge” was on Stranded’s list of original songs for years, but Ortega said it was always one of their favorites to play and last year he demanded it be committed to a recording.

The personal sentiment recently translated into success as the song became a finalist for a New Mexico Music Award.

The statewide contest seeks entries for more than 40 categories hitting almost all genres from Native American traditional to Electronica and hip-hop. The contest has been run for 34 years and is intended to celebrate local New Mexico musicians.

Stranded’s song was a finalist in the Modern Rock category and the band competes compete against five other musicians, all from major cities like Albuquerque and Santa Fe.

Stranded was the only band from New Mexico’s rural communities that advanced in the competition.

There were 10 acts in various categories from Las Cruces and none from Artesia, Hobbs or Roswell.

To Ybarra, that meant the band was alone in representing their community and the southeast corner of the state – a title Stranded was proud of since initially boosting their reputation with the song “285” in 2018 which was about the dangers experienced by oilfield workers and others on U.S. Highway 285 that stretches from Carlsbad to the oilfields south of town.

“It’s home,” Ybarra said of Carlsbad. “We really love our hometown. We’ll always come back to play here in the community.”

The success of the local band and its foray into original songwriting, initially formed in about 2008 as a cover band before going through multiple through subsequent lineup changes, was credited with the songwriting team of Ybarra and Ortega.

The drummer explained he often is struck by inspiration during his daily, hour-long commuted down 285 to Orla, Texas.

He jots down some words in his truck and sends them to Ybarra who puts them to the music.

“I was just driving to work, and I pulled over and wrote the lyrics,” Ortega said of “Angel’s Bridge.”

The group then gathers at Ortega’s garage in Carlsbad to jam out the rest of the piece along with bassist Dario Vasquez.

The walls of their home studio where are adorned with enlarged flyers from significant shows and moments in their career starting with the “285” single release party in 2018.

They’ve spent more time in the studio working on originals lately, as COVID-19 struck New Mexico last year and lead to the cancellation of a long list of gigs.

The band was to play a gig several hours north in Farmington before the pandemic hit, and Ybarra said they had booked gigs all along the way across New Mexico on the way.

“It’s a good thing and a bad thing,” he said of the cancelled shows. “There’s nothing better than playing in front of people. But it gives us an opportunity to write original music.”

The band is confident they’ll be able to get back on the road and play gigs throughout the state and beyond once COVID-19 subsides and live music returns to New Mexico.

By then, they expect to have a library of original songs and self-titled album to offer fans in addition to the classic rock and country covers that often book-end their performances.

Until then, Stranded can be heard on local FM radio stations like 96.3, 104.1 and 106.1 and multiple online streaming services.

But once they can, the band’s ambition knows few limits. They hope to one day play in famous venues like Madison Square Garden in New York or Cabo Wabo, a collection of venues in California, Las Vegas and Mexico founded by Van Halen singer Sammy Hagar.

“If you can dominate in your hometown and in your state, which we’ve done, then the doors open,” Ortega said. “When you’re a kid, you’re sitting in your room looking at your posters and you fantasize. We don’t have to fantasize anymore. We’re making our own music.”