The Artesia Bulldogs found a way to deal with a rough fourth inning while the Carlsbad Cavemen will ask themselves how to avoid another game when the team’s only offensive production comes in a single inning. 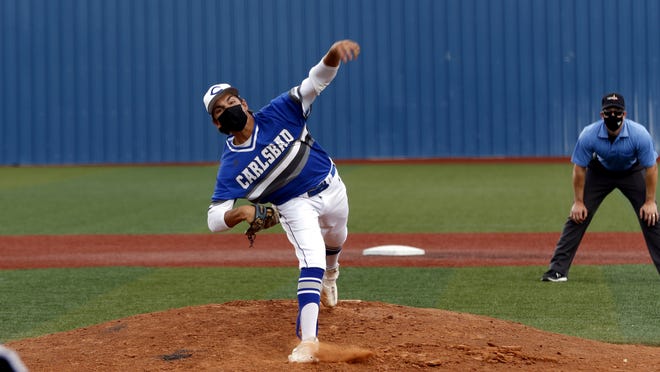 Carlsbad (5-1) fell from the undefeated ranks against rival Artesia (4-3) after squandering a three-run inning midway through the game. The Bulldogs were able to regroup and made the most off Carlsbad’s unforced errors and ended its non-district schedule with a big emotional win, 5-3.

The fourth inning has been the bane of the Artesia baseball season. Against Hobbs in a doubleheader on Tuesday and Friday’s game against Carlsbad, Artesia gave up 11 combined runs in the fourth inning. The difference between the Hobbs games and the Carlsbad game is Artesia found a way to bounce back from the rough inning.

Carlsbad and Artesia came into the fourth inning still tied at 0. Carlsbad had yet to record a single hit when the offense finally woke up. Tristan Thomas started the Cavemen off with a stand-up double. Nolan Perry, Ashton Whiteaker followed with back-to-back doubles of their own and by the end of the fourth inning Carlsbad had recorded five hits and held a 3-0 lead.

Harville ran into trouble against Artesia’s offense. After surrendering one run to the Bulldogs, Harville’s accuracy suffered. Two wild pitches allowed Artesia to tie up the game and force Edmonson to put in Ashton Whiteaker. Harville lasted just 2/3 of an inning. In his 19 pitches he was responsible for four runs, two earned.

Carlsbad’s defense didn’t have an answer when Whiteaker came to the mound. Outfielders Tyler Wages and Thomas collided in left field while trying to run down flyball and a bad throw by third baseman Blaine Wilson to first baseman Kayden Bratcher allowed Artesia to put up five total runs.

Carlsbad wouldn’t get another hit until the bottom of the seventh inning with two outs. It was too little, too late and Artesia’s Josh Madrid was able to pitch a complete game for the Bulldogs. He finished with seven strikeouts.

“I told them to keep fighting and keep each other up. It paid off. We had a couple of bad fourth innings earlier in the season. We got that monkey off our back this time. I’m so proud of these guys. (Next game) we’re finally playing someone in our own class. Our whole pre-district, except for Valencia, was against bigger team. We do that for a reason so we can play the better teams in the state. We want to play the best teams in the state.”

“It’s a tough spot but we didn’t make the plays we needed to make. We had miscommunication in left field that ended in the ball being dropped when Artesia picked up two more runs. We didn’t do our part and we didn’t help ourselves out. We didn’t have a very good approach and swung at a lot of pitches that weren’t in the strike zone. We gave Artesia too many 1-2-3 innings. In the third inning we gave them a four-pitch inning which is just bad baseball on our part.”

“Hopefully we learned something from this. It’s a tough spot in the schedule for us. We have to play three games in two days. That’s not easy for the kids and it changes the way you attack guys while pitching. We would have loved to throw Mack out there and keep him out there. I would have loved to bring Nolan Perry in to close the game but we’ve got two more games tomorrow that we’ve got to figure out how to get through.”

Artesia now begins district play. The Bulldogs host Portales in a doubleheader on May 25 at 4 p.m. Carlsbad hosts Goddard May 22 for a doubleheader. The Cavemen start off its district schedule with a doubleheader at home against Clovis on June 1 at 5 p.m.